A cowboy is born!

While making mischief in his room, Ace discovered his cowboy hat that his Aunt B and Uncle James bought for him way back at the end of Spring when we went to the rodeo. I had put it on his teddy bear because he wouldn't ever keep it on his head. 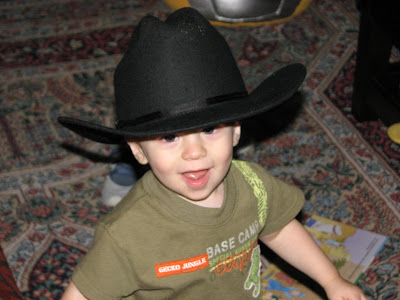 Now he's running all over and won't take it off! 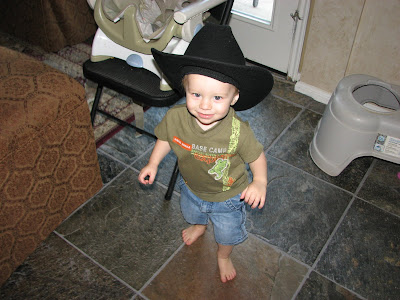 That is so cute. He looks good in the cowboy hat. It was as if he was born to be a cowboy.

I love little boys in cowboy hats! (and big ones too):) David my husband thought this was a great picture! He is a little biased though! Hope all is well in the Evan household! Much love from the Roses

Love the pics of ACE! I enjoyed reading the last few entries of your life adventures...I think the haircut looks great!! Good job! And the cupcakes turned out excellent as well, I think they are CUTE! I'm going to try them too at some point...way to keep trying until you got it right!