Soooo, Bill Mar sparked my fire this morning and I think he should argue me this.....Let me first say that I didn't come up with this argument. It's from More than a Carpenter.

Let's just rationally consider who Jesus may have been. We have three choices:

Liar - People like Bill Mar might say Jesus was lying about who he was. Jesus says he is the Son of God and also God himself. Don't you think a liar would give you things that are easy to convince you of? Liars tell us that Noah couldn't possibly have gotten two of every animal into a boat nor could a man live to be 900. Those things are easy to believe. Jesus didn't say those things. Quite the opposite. That's not very effective lying. Furthermore, who would die as Jesus did for a lie. Personally, I'd break after the first whiplash. I never would have made it to the nails. Jesus died because he couldn't lie. But, let's say that Jesus isn't a liar...

Lunatic - Unbelievers may concede that Jesus wasn't purposely lying...he was just CRAZY. Really? If you would just read a passage in the Bible, you would see that Jesus' logic is flawless. Look at our world (which is evermore turning from the commandments) and see if Jesus wasn't right - that we should not murder, committ adulterly, covet, etc. Even sarcasm...and I think I'm pretty good at it...Jesus said sarcasm isn't "for me." My latest valley was steeped in sarcasm. Jesus knew that material possessions and worldly success wouldn't satisfy us...but the world says it will. Do you think a million dollars will make you happy? Yes? Jesus says it won't. I think the Lottery Winners on E! would agree with Jesus. I think Jesus' arguments and teachings are more logical than we want to believe...because believing them admits that we need him (and this world tells us that we don't need anyone).

Lord - If he wasn't lying and wasn't crazy...what if he was telling the truth? Jesus said that he is the Lord. I bet if you asked him to, he'd convince you too.

If you don't agree with me...am I crazy? Am I just a wishful thinker or an idealist? Nope. I am a rational thinker (when Ace doesn't keep me up through the night). I am convinced God has three persons: The Father, the Son and the Holy Ghost. I can't explain it but I won't need to once this life is past - and you won't need my explanation.

Did anyone watch the View this morning? I usually have the tv on in the background while I work. When Sherri Shepard and Bill Mar started discussing religion I stopped my work time and actually listened. I thought he acted like anyone who believes the Bible is a mindless idiot. I was not only personally offended, I was/ am mad. Someone who would spend all of their tv time attacking (yes, it is an attack when he flippantly pretends to know how a believer thinks and writes it off) religion must feel fairly threatened by it.

He's gotten my angel-feathers all in a fluff! Some people just don't understand. What frustration! But, the saving grace was that Sherri asked Bill if he'd ever asked the Lord for understanding. James 4:2 "You do not get things because you do not ask for things." All we have to do is ask for understanding.

Bill Mar is supposed to be a comedian. I didn't find anything he said funny.

Just a quick Evans' update.
1. Ace - he is saying words! Finally! Today he said "Dora" and "cracker." He has really started repeating what we say. His favorite book is "Brown Bear" (thanks Gabby and Pops) and he loves to roar whenever he sees a lion (several books and toys). I mean he seriously loves to roar. I'll try to get it on video.
2. Jonathan - is in Waco tonight and tomorrow. He's speaking to some Baylor business classes. He said that being back in Waco was confirmation of his decision to uproot and move to Houston. I'm really grateful for his confidence in his decision. He works so hard he's too exhausted to talk about it when he comes home.
3. Kelly - I am lamenting over People Magazine's upcoming cover...yes, Clay is gay. No need to tell me that you told me so. I'm devastated. I'm too busy to cry long though - headed to Waco on Friday to give a QuickBooks training seminar.
4. Hula - is a MESS and Ace's favorite play toy. Everyday, at some point, I put her in her crate thinking...if Ace messed with me like that, I would bite him so I better separate them before she decides she's had enough.

House...I've called the insurance agent and put in a claim because Ace's room smells HORRENDOUS! I'm praying that it isn't mold but am afraid it's either that or something has died in the floor. Ace is sleeping in the guest room.

What a crazy life the Lord has us living! I'm thankful for health and happiness, jobs and family!

This is three minutes of Ace being the CENTER of ATTENTION at Mike and Karmen's wedding on Saturday night. Lately, he has been dancing up a storm and it peaked at the wedding. It's half dancing and half running around like a mad man. I'm so mad that the quality of this video is bad but his cuteness makes up for it. Sorry it's so long. I just couldn't stop filming!

This is worth reading. My family was laughing out loud! The He said - She said part is my favorite.

2. VULNERABLE
Female.....Fully opening up one's self emotionally to another.
Male.....Playing football without a cup

3. COMMUNICATION
Female.....The open sharing of thoughts and feelings with one's partner.
Male.....Leaving a note before taking off on a fishing trip with the boys.

4. COMMITTMENT
Female.....A desire to get married and raise a family.
Male.....Trying not to hit on another woman while out with this one.

5. ENTERTAINMENT
Female.....A good movie, concert, play or book.
Male.....Anything that can be done while drinking beer.

7. MAKING LOVE
Female.....The greatest expression of intimacy a couple can achieve.
Male.....Call it whatever you what, just as long as we do it.

He said...Shall we try swapping positions tonight?
She said...That's a good idea. You stand by the ironing board while I sit on the sofa and fart.

He said...What have you been doing with all the grocery money I gave you?
She said...Turn sideways and look in the mirror.

He said...How many men does it take to change a roll of toilet paper?
She said...We don't know; it has never happened.

He said...What do you call a woman who knows where her husband is every second of the night?
She said...A widow.

Jonathan - I love you!

These photos are unbelievable... We took Ace to Kemah when he was just a few months old. Now the Boardwalk is flooded! And here is a picture of the storm surge. 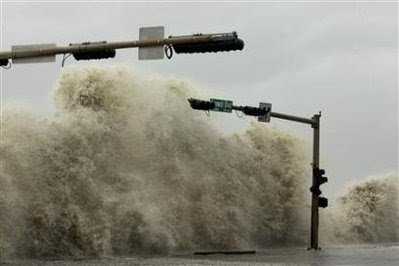 I can't imagine what good old Noah thought when God flooded the entire EARTH! Right now, I've got a new appreciation for God's promise never to do that again.

Update: Jonathan has power! It was turned on yesterday about 2:30 p.m. (Hilary and Nathan also have power but my Aunt Barby and Uncle James do not.) We have flooding in Ace's room and it's leaking into my office but it's just water damage and that can be fixed. Apparently there is something wrong with the cover of our front porch. Hopefully tomorrow I will have photos of the neighborhood. Ace and I are planning to trek home after work.

I just talked to Jonathan and he said that last night was not what he expected. He said he thought it'd be like a really bad thunderstorm but there was no thunder and no lightning. He thought there was lightning but it was the transformers blowing. He thinks that the neighbor's house shielded ours for most of the night but the winds are now out of the south and buffeting the front of our house. He thinks our garage door is done and is a little worried about the front windows. The power is out and he doesn't have any water but he has telephone...thank you AT&T! He said that he's been listening to the radio that said the power companies were going to start working on restoring power on MONDAY. They apparently have to take a helicopter to assess everything and then they'll start with the worst of it. Hula...well...she slept through all of it according to Jonathan (she takes after her mommy). Hilary, Nathan and the babies are ok as well. They lost the two trees in their backyard but I think that was the worst of their damage. Mom and I briefly talked to Uncle James this morning. Aunt B was sleeping but they got hit harder than anyone since they are so close to I45.

I'm so thankful that Jonathan is okay. I'm just really anxious to go home and see him. 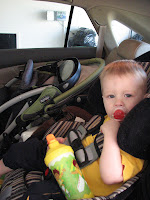 Yes, Ace and I evacuated to San Antonio before Ike comes. After much debate about whether or not to stay or go, I made the decision to leave. We got out of town about 10am...thank goodness! 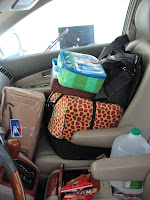 We had lots of snacks and plenty of water (see the space between the seats). Ace gobbled down all of his O's: Fritos, Cheerios and Cheetos. 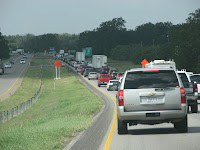 This was the worst traffic we faced. It was the turnoff to Austin where I think most are evacuating. Our Daddy is still at home with Hula so tonight we are a little anxious but we are also hopeful that all he'll experience is a power outage.
We miss you Daddy.

Thank you so much Jeanne and DL for my Hog football and baseball cap. 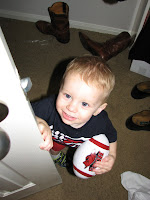 Ace LOVES his new cap. He'll pull it off his head and then get really frustrated when he can't get it back on his head. 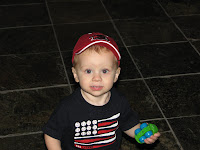 He was walking around, covering his face with it! It was fun until he walked into a few walls. 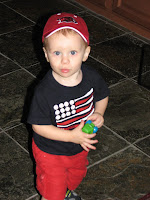 We are trying to teach him "Wooooo Pig Soooie" by Monday night's dinner. Right now, he just says "Wooooo." Ya'll were so thoughtful to get him these goodies. He is loving them. 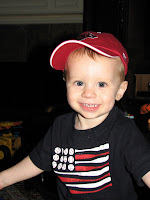 McCain's daughter has been all over the tv and she mentioned that she is keeping a blog of the campaign. I visited her blog and thought it was really interesting and down to earth. It was neat to think of what it must be like to see your dad in front of the RNC and running for president. The photos are great.

Saturday, we decorated the house for a surprise party to celebrate Aunt B's 50th birthday party. Below are some of the photos of all the fun we had. 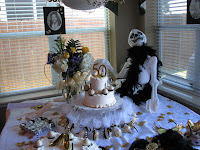 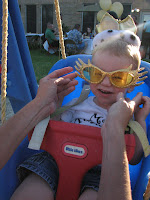 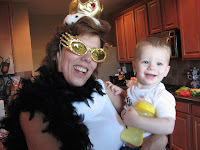 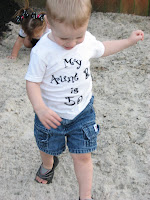 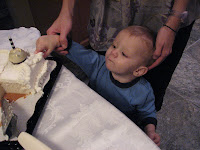 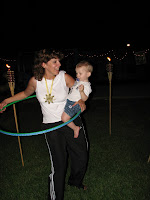 I have been SOOOO excited for the past two weeks because we ordered new home office furniture. FINALLY, I can stop working from my antique vanity that belongs to my childhood bedroom suit. The furniture came last Friday and was damaged so we had to send it back to the company. They are rescheduled to come tomorrow! With God's grace, everything will be in good condition this time. I have been painting at all hours to get finished by the time the desk is delivered tomorrow. Jonathan and I painted the room blue on Sunday and I've been madly stenciling the white floral pattern . Below are photos of the current AWFUL state of my office, the hutch we ordered for the desk and the stencilling. 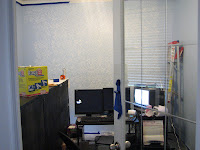 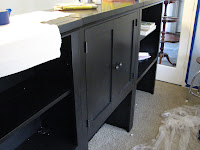 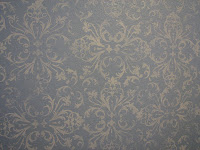