Aunt B and Uncle James have been going to the Houston Air Show for over 10 years. They used to go with my grandpa who flew during wartime. A picture of "Paw Paw Johnny" hangs in Ace's room and, though he is no longer physically with us, Ace talks about Paw Paw all the time and knows he flew. Paw Paw used to share his good candy only with me and he has a really special place in my heart. 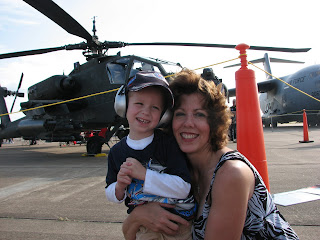 Jonathan's grandad was a highly regarded airman too. Ace comes from good stock. 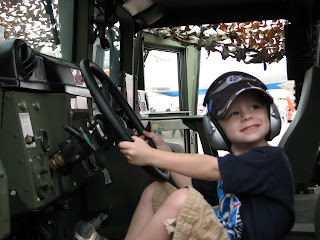 He was lovin' driving the hummer.
The big attraction this year were the Thunderbird. They were A-MA-ZING. 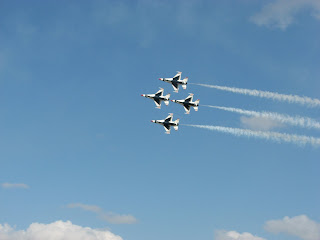 I cannot describe how closely they flew together. It was as if any of them changed their speed at all, they would touch. 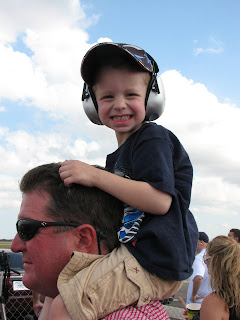 Can't believe I actually managed a picture of one upside down and one right-side up! Most of the time, they were so fast my camera was pointed in the entirely wrong direction because they had flown past me. 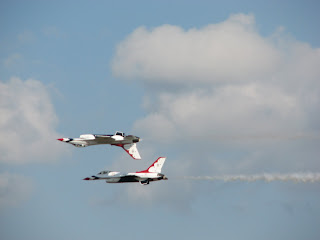 Yup! He rode the mechanical bull. HE insisted that's what he wanted to do and, despite promising me he wouldn't cry, the bull bucked a little too much and he cried to be let off. Hey, high points for the attempt. 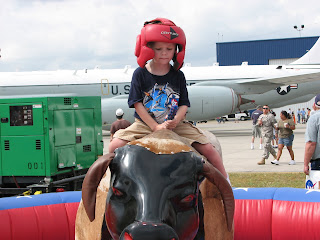 It was a fantastic time and Ace loved it. He told Uncle James as we left that "it was the greatest time." I have to give credit to Jonathan who stayed home with Lily Kate so that I could go. He did feedings, naps and everything!!! When I got home, she was happy, fed and clean. I am still pretty amazed. He was a little unhappy that he'd missed going to the HUGE Baylor win over Kansas in Waco but plans to travel to their bowl game to make up for it.

Is there anything better than your babies' smiles? I'll answer that: NOPE.

I am so greedy for Lily Kate's for smiles.

Jonathan and I were soooo against "baby talk" with Ace. We got off that high horse when Lily Kate was born because she ADORES baby talk and we will do anything and talk anyhow to get her to smile. I thought Ace was a smiley baby but he has some competition here.

Ace has always been a fabulous picture-taker; he will say "cheese" for me whenever I get out the camera. For the past two weeks, he has not cooperated. Lily Kate was having none of it today until we just wore her out enough for her to go limp on some pumpkins. 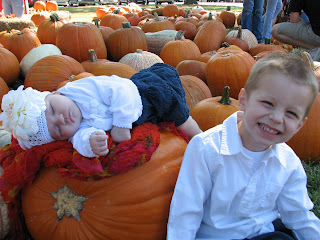 Ace does this face when he's tired of pictures. 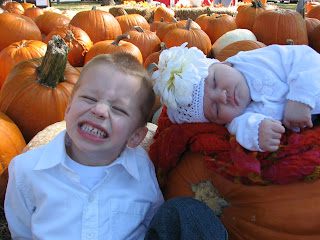 Worn out.
(I will brag and say that this little pumpkin stopped traffic. Everyone around us stopped to ooh and aah over her. She's getting more beautiful every day.) 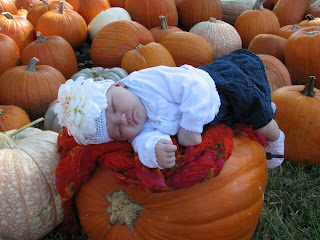 Attempting a pic of both kids at the same time. 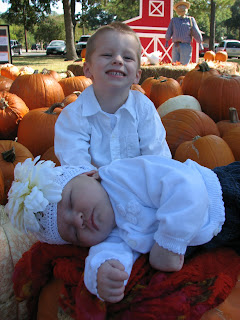 Ah me. I tried.
Ace got ice cream afterwards and I'm about to get a nap.
This is why I'm a CPA and not a photographer.

If I were to imagine my perfect afternoon, it would have been last Sunday:
75 degrees
A shady spot at the park
Burgers
A blanket
Holding my babies 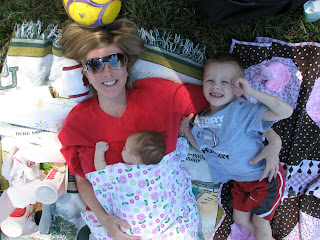 I shut my eyes a few times and just listened to Jonathan and Ace playing and laughing & the sound of Lily Kate breathing. I can't imagine a bigger gift. 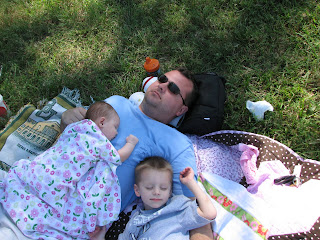 It didn't last long enough and I'm hoping for a repeat this weekend. 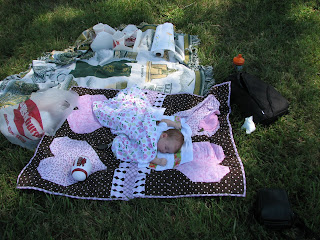 It was nice to slow down, turn the tv off (which never happens in our house) and just feel the sun on my skin along with a cool breeze. (Houston gets plenty of the sun but not the breeze!)
I will retreat to the memory of this afternoon whenever I have a bad day.