Ace is ready to go his his Aunt LeLe, Uncle Allen, Ba-look-a-lyn and Braedyn. He's pretty excited to see Honey and Sashi too. (This is the Tigger backpack that holds all of his DVDs...also known as my "sanity sack" for road trips.) 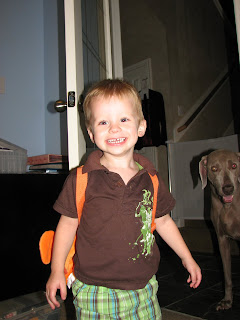 "Momma, you pack my suitcase?" 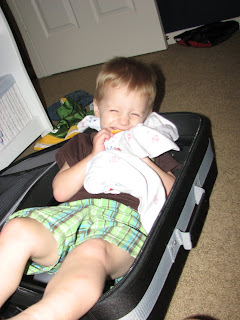 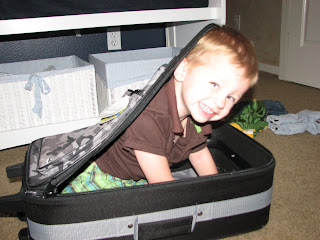 So here's going to a week of training in Waco and Ace getting WORN out with his cousins.

Mommy LOVES Sea World so, before the summer ended, Acey had to go. Here he is before we headed out the door.

Actually, we dropped my car off for an oil change and then went off to Sea World...it applies later in the post.

HONEY actually bought us fish to feed the dolphins. Gross, gross, gross. The things I do for Ace. If I had only let him do it. When there was only one fish left, he grabbed it out of the tray and threw it in the dolphin pool himself. 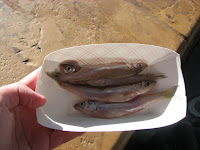 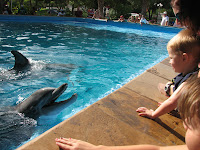 Next was the Shark exhibit. Ace especially loved the jellyfish and the sharks. He kept saying, "There's Bruce." (Bruce is the Shark in Shark Tale.) We definitely watched Shark Tale and Nemo before going to Sea World so that we could look for them when we got there.

This photo was taken at the first show of the day. He was a wild man, running up and down the bleachers!!! 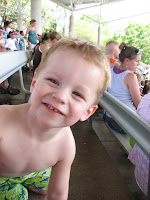 It was HOT. Honey got Ace a frozen lemonade which he loved. It was almost as big as he is. 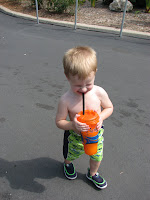 The second show was SHAMU. Ace wasn't as into it as I hoped he would be but the flips and jumps were fantastic. 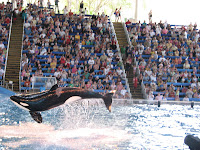 We stpopped for a popcorn break. This is a photo of a hot, tired, toot of a two year old. 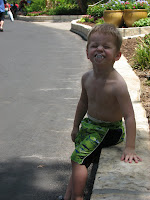 To cool off, we hit Shamu's Happy Harbor. He was in HEAVEN. We went during one of the shows so there weren't a lot of kids (we tried to go to that show but Ace was too tired to pay attention to it). Once the show let out, it was a madhouse. Getting Ace to leave was a misery. 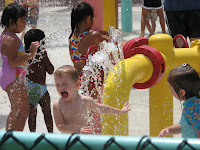 We had to race back to get Mommy's car from the oil change place. It's a good think we left when we did because this little man was OUT in a matter of minutes after we left the park. 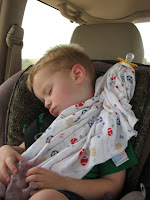 Groan of a side note: It turned out I needed new brakes (as in, the car guy said they wouldn't last through next week!) and four new tires. Got the new tires put on Saturday morning, went to pick up Kate for dinner and as I turned around on her street I GOT A FLAT TIRE!!! Luckily, her friend, Daniel, was close by and he gave us a 101 class on how to change a tire. 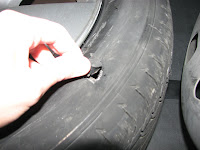 We managed to still have dinner but Ace and I had to stay in San Antonio through Monday to get a FIFTH new tire and, yes, I had to pay for it. Ouch.
We had such a great time. It's a do-over for next summer.

I am hoping that Ace recognizes his mommy when
I go to pick him up from Nana's this afternoon. 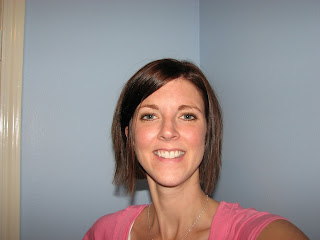 B had the day off on Monday so she came and grabbed Ace for some good times on the Carousel. She asked him on Sunday if he wanted to ride the carousel. Luckily it was almost bedtime because he thought he was going right then and was NOT happy when he discovered he had to wait. Looks like he found his happy face though... 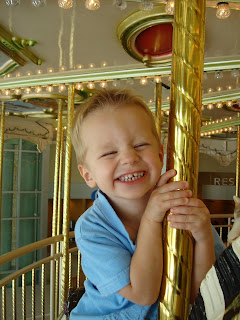 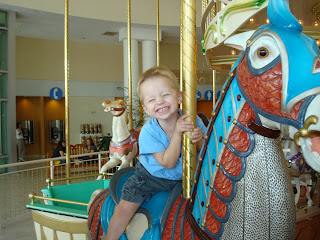 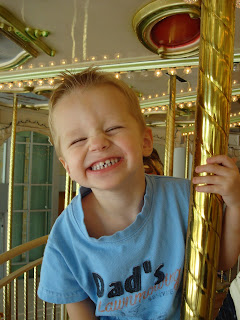 What a happy little guy we have. Anyone know how to freeze time?

A few items from our week last week...
I'm always so jealous of friends who cook fabulous meals and make their recipes sound so yummy (See Domestic Notebook blog...I'm green with envy at every post). I finally MADE time for a creation of my own... 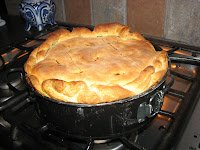 Giada's baked angelhair with eggplant. (Sorry, time crunch posting and no time to hyperlink.)Jonathan actually said it may be the best thing I've cooked since we got married! 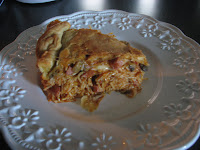 Saturday morning, before my four-mile run (hooray, I survived it), Ace and I went for a donut date. Hey, mommy needed some energy. It was so humid that my camera lens fogged up! 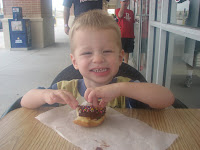 More sugar for my sweet...Ace and I went by the Great American Cookie Company and indulged after church Saturday night. He was so excited. He held a complete conversation with the cookie guy and ran up and down the counter saying, "I want that one, and that one, and that one....." He's definitely mine! 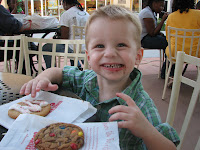 At the zoo on Sunday, we laughed and laughed because the lion's name was Jonathan. The description of the lion cracked us up even more (hopefully you can click and make it big enough to read). 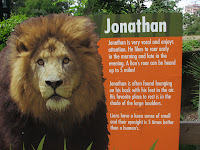 Love me some Ace. 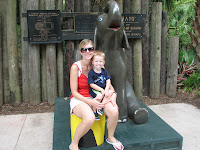 Daddy loves him some Ace too. Daddy held Ace up to the fish tank and, all of a sudden, a big catfish-looking algae-eater swam right in front of his face and TERRIFIED him! He started crying. Poor baby. 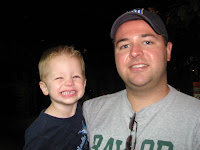 So sweaty from the zoo we needed a bath. Ace's latest is to "float" in his bath, which means he lays down in the water. That means our baths now only contain like an inch of water! 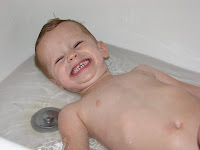 Just a bunch of our random doings.

Finally! The pictures in our header were over a year old which means Ace looks like a completely different person now! I've been wanting to redo the blog for a while but couldn't find the time. Yippee. I can mark that off my list now.