Kind of like Ace's birthday party, this post about it is belated.
Ace didn't get a birthday party back in March because...well...Mommy can't juggle tax season and birthday parties at the same time.  Luckily, Ace is VERY understanding and ALWAYS up for a party in his honor no matter the time of year.  So we threw a CAMPING themed party. 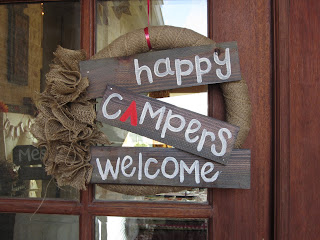 I wanted to buy a banner online but everything was $40+ and I was too last minute to receive anything in time. Desperation is the mother of inspiration. I found some chevron burlap ribbon and cut out letters (by hand, ugh), with a little super glue, wa-la! 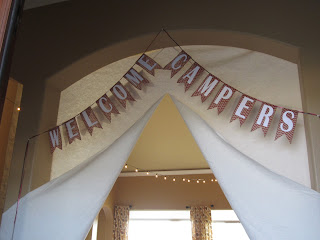 I wanted to put some "camp signs" around so the kids and I bought some cheap wood at Home Depot, stained it and painted them. Yes, the kids helped me stain the wood. Brave? Stupid? Yes and Yes. 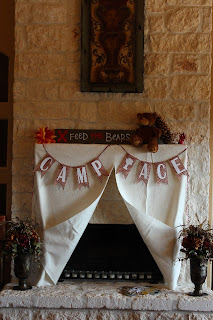 Pinterest was my best friend and inspired the cupcake with "fire" icing.  HEB totally came thru in the clutch. Some pirouettes, twix, rock candy and colored candles and we were in business. Might I add that I think the cake surrounded by cupcakes is just an awesome idea because the cake can be entirely one flavor and the cupcakes another...HEB is so smart. 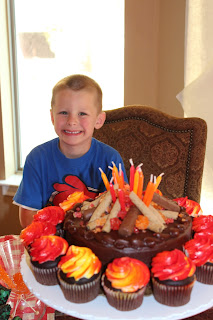 As if this kid needs to wish for anything when he has everything!﻿ 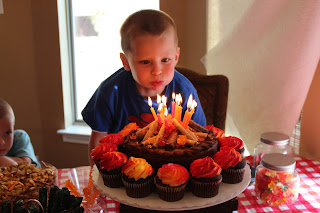 My beef with birthday party sites and Pinterest is that they give great decoration ideas and ZERO ideas for games and activities which are what the kids really care about. So I put my imagination-cap on and here's what we did:
Oriental Trading Company had some backpacks that you color with a camping theme on them so we colored those. 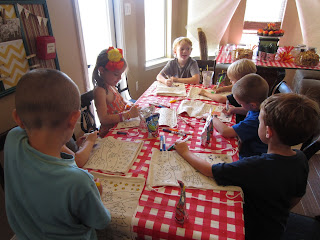 We strapped on our colored backpacks and headed outside where we had hidden tons of plastic bugs and critters. The kids had to hunt for them and whoever had the most at the end got a prize. We literally did this 4 or 5 times. They loved it. 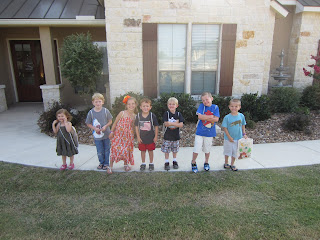 We went "fishing" for prizes (just like at school carnivals and trunk-or-treats). The prizes came out of the giant bags of goodies from Party City. 6 year olds love cheap junk. Works for me. 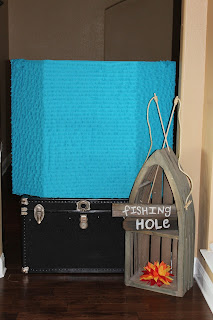 I let each party guest make their own pizza. Hey, we usually do it on Friday nights anyway so I figured the other kids would enjoy it as much as we normally do. Of course, we indulged too: chex mix, gummie bears, sour worms, rock candy and carmel + chocolate covered pretzels. Side note: I will never make JUST chocolate covered pretzels again.  The caramel is worth the trouble! 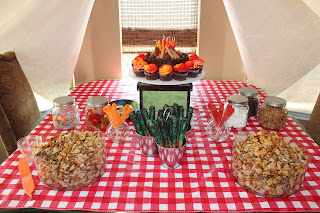 We also played musical "pillows" a billion times.  I got these iron-on transfers from KidsSweetTees from FaceBook. The kids also had to sit on them while we read "scary campfire stories." I searched for hours for stories that weren't too scary and EVERYTHING I found was terrifying or gross or too old.  5 Funny Frights was PERFECT but almost impossible to find online. 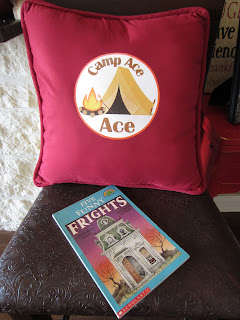 Silly boys. We attempted a sleepover but it was a total bust. The last boy gave up about 11:45 and his parents came to pick him up. Poor Ace. We will not be attempting another sleepover any time soon. 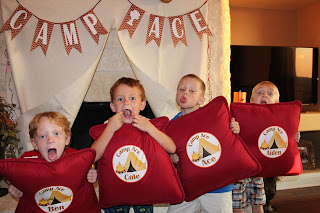 The party was extra special because Brookelyn and Braedyn happened to be in town and got to come. Brookelyn was master of the bug-hunt. 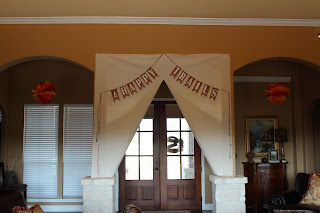 I actually saw the Mommy of one of the boys the other day and she said her little boy sleeps with his pillow every night. So sweet!  Next year, no birthday parties at home and definitely not two in one month! Although Ace really liked his summer birthday party.

Wow! What a party!

“Then of course, lots of people like situation, or they might really like the actual fight, though the something that is certainly personal is always that people truly affix to the laughter. Not basically in the figures, nevertheless with the developing, and the issues you are capable of doing. The fact equally as you can wipe out a hobbe, probably the hobbe will try to function away from and may come across any walls tissue layer along with tumble over. Just fart before your lady as well as she’ll basically divorce you basically because you’ve stunned your ex much.”Lord is aware of Desire Home heating coloured any laugh on my own deal with which remained usually there while i conducted.