(Just for LeLe.)
If there's anything Jonathan and I love to purchase, it's over-sized furniture. Show us the BIGGEST, HEAVIEST, HARD-TO-DELIVER furniture and we just have to have it. The same held true for Ace's new big-boy bed. Here it is. It barely fits in his room! 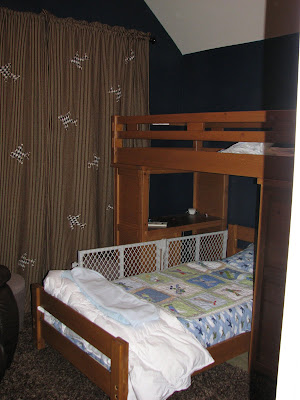 I've got to sew the duvet covers still but, for right now, Ace is happy with the sheets from Honey and a baby quilt from Aunt B. Thanks! 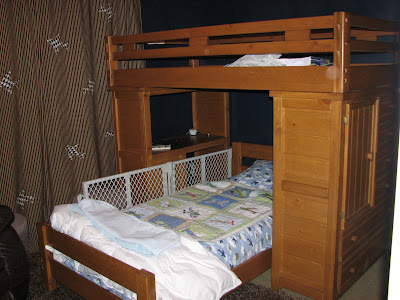 Delivery was not so fun. We came back from San Antonio and Ace had turned off our answering machine so we didn't get the message giving us delivery window time. Jonathan called and they said 3pm to 7pm. I got a second call from them later that day that said it would be closer to 7pm. At 7:45, Jonathan called and the lady told him that they'd still be there at 7 (he kindly informed her that it was already after 7pm and she said, "Oh, I meant 8."). What she REALLY meant was 10pm! They didn't leave until 11pm. At least, Ace was happily re-watching all of his cartoons from the day.
We he saw it he took a deep intake of breath and said, "I like it." Wish I would've gotten it on camera but we were too tired and aggravated at that point. He absolutely LOVES it. He calls it his "tunnel." It's really cute to hear him call it his "big boy bed."
Now...in the past two months, we have potty-trained and transitioned to our big boy bed. Getting rid of the paci will be next. Lord help me!