If you don't already know that Ace is obsessed with Monster Trucks, you haven't talked to us in quite a while. We decided to indulge him and take him to Monster Jam last Saturday. 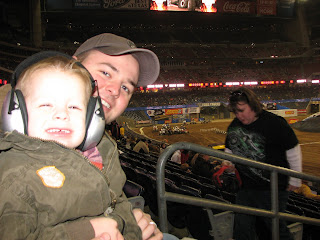 They started out with four-wheeler racing. The guy in the lower-left-hand corner was jumping off his vehicle to help another guy that had just eaten the floor. 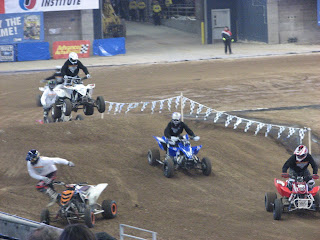 Bundled up and behaving...for now.
We were fairly close to the action which meant a lot of stairs...not so fun when Ace needed to go potty no less than 8 times. Our thighs were on fire. 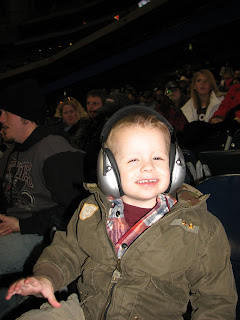 He polished off almost an entire bucket of popcorn by himself. That's nutritional, right? It's corn... 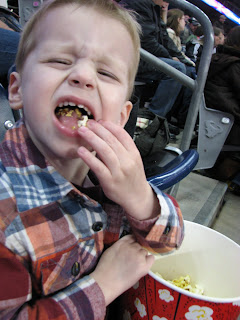 His favorite was all of the crashes. Out of the 15 trucks there, I'd say that only about 5 DIDN'T crash! 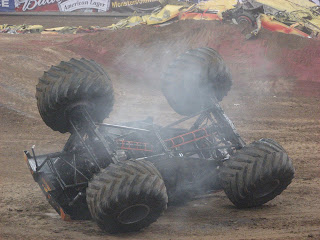 Wow...not the best photo I've ever taken but Ace's face was hilarious. We have no idea why he was doing that. You can tell I was bundled too - scarf and mittens. It was COLD. 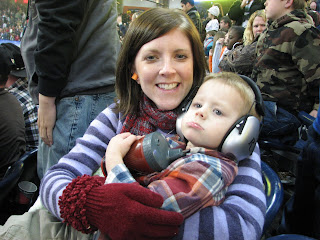 Jonathan and I need to rest before taking him to another Monster Jam event (all of the squirming, popcorn spilling, beer splashing and trips to the potty we slept till almost 10am the next morning AND took naps that afternoon). Ace had the best time though.

I totally want to take P to one- he would LOVE it! How did you find out when/where it was? Maybe we could join you next time if there isn't one in San antonio!

That looks like so much "boy fun"...Sophie hasn't expressed an interest in anything by babies and tea parties :)