Em, this post is in your honor. Wish I had your camera and instruction-skills. Everyone should follow the Domestic Notebook.
So, I've been making Ace's duvet covers (even though I despise duvets in general because it never stays in the cover properly) and I decided to fix my own problem. I sewed loops into the corners to fasten the duvet in place!!!!
First, I cut strips of fabric (the loops are thicker and on the left, the ties are thinner and on the right). 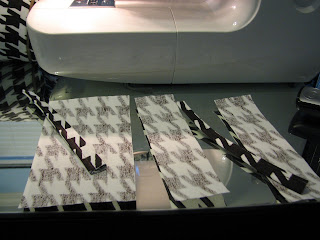 I sewed the ties onto the duvet. 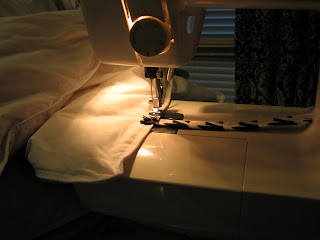 I sewed the loops onto the SEAM (so it wouldn't show or interfere with the cover). 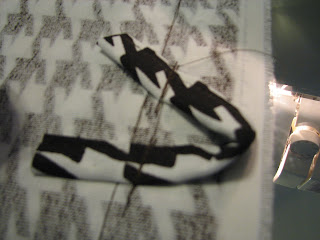 I took the tie and put it through the loop and tied it off at each of the four corners so the duvet will stay distributed through the cover. 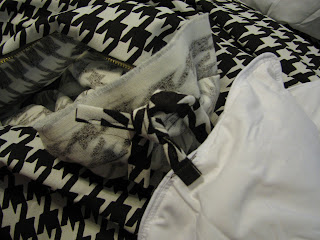 Please department stores, start putting these on all the duvet covers and duvets!
An even better solution would be to add more loops and more ties but I'm on a time crunch.

That's so wierd to me that you've never had a duvet that had ties in the corners- we have had 3 different duvets and they all had 4corner ties! You will now LOVE duvets!!

Ha ha! You know, our duvets don't have ties but we haven't had trouble with them slipping around either. Bravo for your creativity! I'm impressed!!
-Em