Yesterday, about 3:45, I looked out the front door and thought I was going crazy...it was SNOWING! My angel was sleeping but I woke him up from his nap and slapped on his shoes, mittens and his winter jacket and we outside. 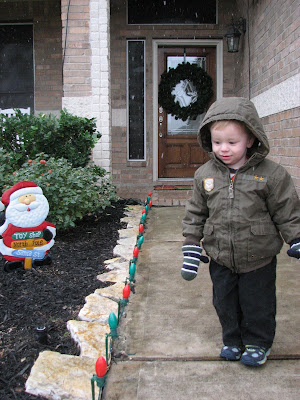 It is the second time it's snowed since Ace was born. The first was in Waco the second day we were home from the hospital but, of course, he'd never remember that so it was the first time he'd seen snow.

I bought a $5 Santa from Walmart because I just knew Ace would love it. I was right. He always calls Santa "Noah" but he can say Santa too.

If we could bottle cuteness and sell it, we'd be millionaires!